You are here: Home / Job seeker testimonials / Tom’s journey from Polio to finding his passion

Tom’s journey from Polio to finding his passion 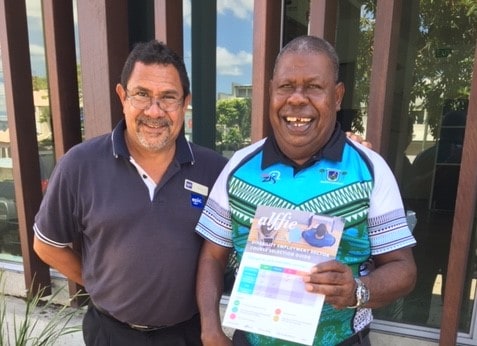 One of our Cairns job seekers, Tom, wrote to us recently to share a little about his life and journey to employment and further education. Tom’s come a long way, and we couldn’t be happier to have played a role in his success.

“My name is Tom and I was born on Thursday Island in 1958. Where I grew up and at an early age, there was a great sickness that swept through the whole of the Torres Straits Islands, including Thursday Island.  During that time in the 50’s it was so bad that it affected both adults and children, with some of them passing away due to lack of medical assistance. That sickness was Polio.

I was in my very early life stages when I too became ill with Polio. My right leg, right hand and basically the whole right side of my whole body was affected by the sickness. During the sickness I was not able to walk and had to crawl on my bottom everywhere I went. I could never have imagined my life now, living in Cairns independently at the age of 60.

I have to thank my parents for always looking after me.

When I was young, my parents had to do everything for me. They took very good care of me, taking me down to the beach where they would wash/massage my body with salt water every morning and afternoon. I eventually improved, but it took a long time and my parents were there from start to finish. They helped me achieve what I wanted, which was a normal life like everybody else.

I also want to thank Lord God for his love, mercies, and strengths, which mean I am still standing here today, telling my story of overcoming great obstacles. He has given me hope to live a life that he would have wanted for me.

After completing primary and secondary school on Thursday Island, I got my first job at the Thursday Island General Hospital at the age of 18. I worked as a Cleaner and Orderly, and remained there for over 10 years. When I was due for my long service, I was asked to take the well-earned holiday I had never had. It was 1987 when I decided to go and visit my family in Weipa, who I had not seen for a very long time. I very much enjoyed my time there and enjoyed catching up with the boys. We had so much fun.

When it was time to leave I did not want to go back to work but did. I lasted only two more months and decided to resign and do something different.

I decided to spend more time with my family, as I started to miss them and home was calling me back.

I somehow landed on my feet straight away and found a job working for Community Counsels of Naprinum as a Coordinator. I was asked if I wanted to further my studies, and attended TAFE in Cairns to undertake a Certificate III in Horticulture.

After visiting my Mother and Father in Thursday Island, and working for a time as a Hotel Porter and Relief Groundsman, I moved to Cairns permanently.

I worked there for a couple of months and decided I was going back to Cairns, as I had family there and Cairns had better employment prospects. This became the place I set up for the rest of my life, making a home where I could raise my family. I have pursued many paths to my career and even enrolled in a Bachelor of Community Services, which I did not finish at the time.

I got in touch with EPIC Assist (EPIC) initially to help me look for casual employment. As well as that, EPIC has given me the opportunity to finish my studies in Community Services, which I am very happy about, as I would very much like to work with troubled youths who are at risk with drugs and police.

Thank you for taking the time to read my story.”