You are here: Home / Employer testimonials / “Elizabeth has proved to us all, including the customers, that having a disability does not hold you back.”

“Elizabeth has proved to us all, including the customers, that having a disability does not hold you back.” 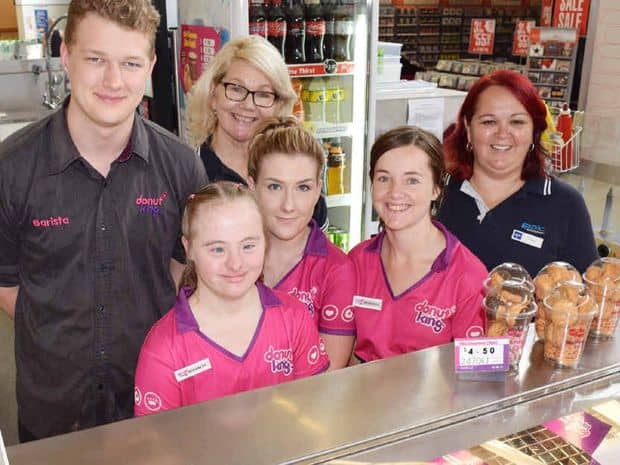 17-year-old Elizabeth has been a much-loved part of the Donut King Yeppoon Central team for almost a year, charming customers and colleagues alike with her big smile, dedication to her job and enthusiasm for life.

For many years, it has been Elizabeth’s dream to work at Donut King; a dream that became a reality when she began studying a Certificate II in Retail in October 2015.

When our team first approached Lisa Hart, Franchisee at Donut King Yeppoon Central, she jumped at the chance to help Elizabeth realise her potential and grow professionally and personally.

“I have known Elizabeth and her family since 2004 and I know it has always been her dream to work at Donut King.  When they approached me to provide the workplace for her Certificate Course, I didn’t hesitate,” said Lisa.

“Being able to assist a young girl with a disability achieve her dream was enough inspiration for me.”

Since beginning her traineeship, Elizabeth has grown from strength to strength. Not only has she continued to learn new skills and challenge herself every day, she has made a significant impact on those around her.

“Elizabeth has exceeded expectations at Donut King and has managed to grasp and learn many of the procedures in store.  She is always well presented, always happy and loves coming to work,” said Lisa.

“Elizabeth has proved to us all, including the customers, that having a disability does not hold you back.  She is an inspiration to all of us and we are very proud to have her as part of our team.”

Impressed by Elizabeth’s attitude and work ethic, we decided to nominate her for Trainee of the Year in the Queensland Training Awards. Elizabeth went on to be named a Top 5 finalist in her category from a field of 660 applicants overall.

Elizabeth’s mother Kim says the traineeship has been a wonderful step in further developing her daughter’s confidence and life skills, and she loves watching her progress.

“Since commencing work with Donut King I have watched Elizabeth develop a vast number of skills and have a positive impact on her working environment and the wider community. She has been described as a role model and I have witnessed this first hand,” said Kim.

“I have watched her confidence in performing her role at work, her commitment to giving her best each every day no matter what the task, her persistence to learn new things, and her unconditional love and respect for those who are blessed with getting to know her.”

“I am her mother and every day she manages to leave me speechless and inspired.”