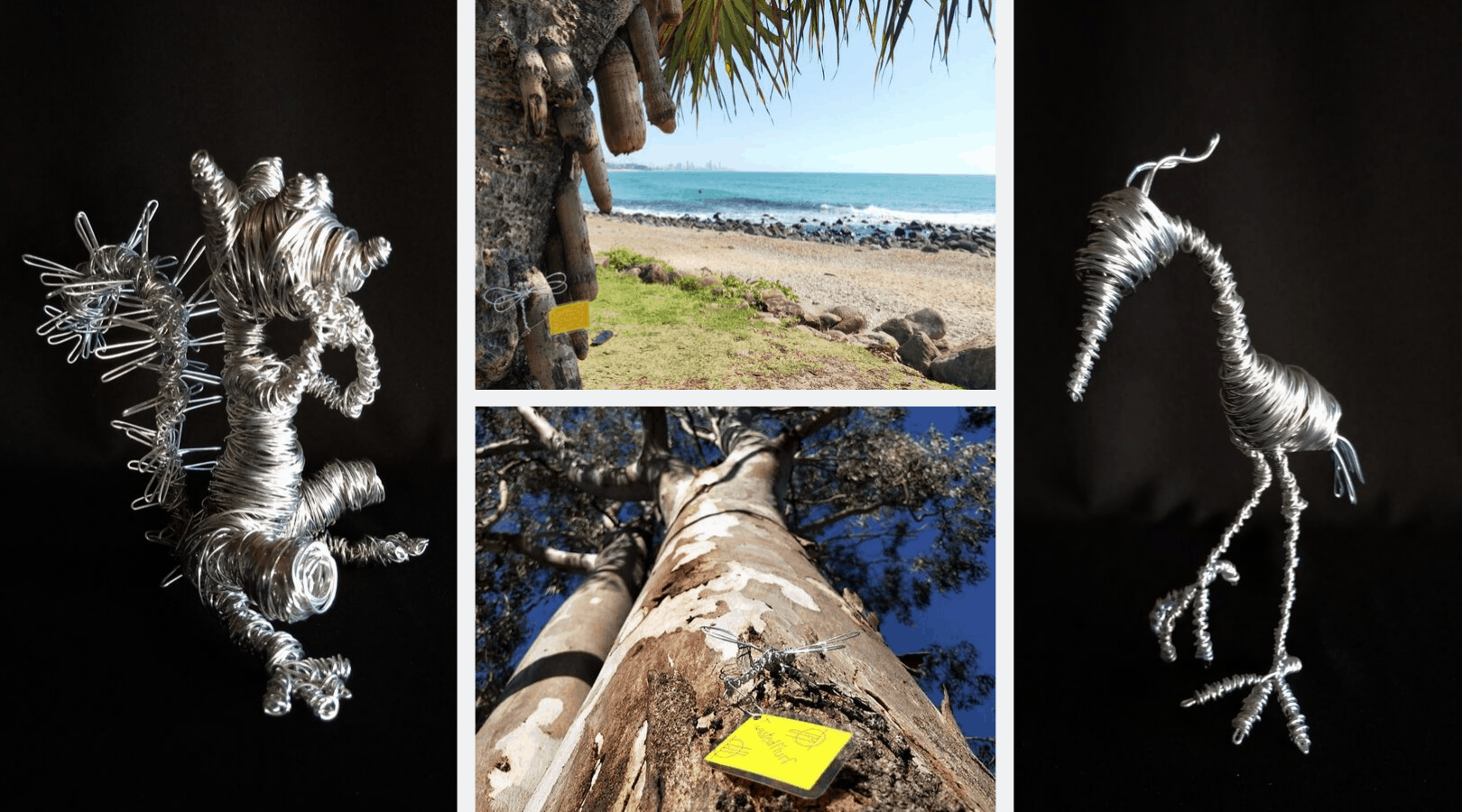 Tim Murphy always knew he wanted to work with animals, he just didn’t know it would be through art.

As an artist, Tim is known as Twisted Murf. Diagnosed with bipolar, Tim has been in and out of hospital for twenty years.

Thirteen years ago, he started twisting scraps of welding wire into animals and leaving them on the bus for strangers to find.

Working in a scaffolding factory at the time, Tim thought about how finding a piece like his would cheer him up and wanted to share that feeling with others.

Today, his Facebook and Instagram followers eagerly await clues as to where they can find the latest ‘Twisted Murf’ creation.

“The depression is the hardest part because it lasts a long time. The manic episodes, as crazy as they are, can be quite enjoyable,” Tim said.

“I present quite unwell when I go manic. I completely lose the plot by all intensive standards of society and when that happens, it’s months of recovery. Recovery itself is just an ongoing process.”

Having long-term employment has been challenging, due to the depression the bipolar brings. That’s where art has had a key role in turning Tim’s perspective around.

“I just wanted a little bit more joy in the world. To give people a bit of happiness, a random surprise for a stranger.”

Tim hides his pieces in parks or public places, which also gets him out of the house doing something that he enjoys. He takes a photo, posts it to Facebook with some clues, and encourages people to go and look for it.

“I call them an art bomb, because they create an explosion of joy.”

Though most of his pieces are hidden locally on the Gold Coast, friends and family have helped hide them as far away as Portugal, Switzerland, France and Scotland.

“A lot of people see someone with a mental health issue as somehow not equal, or a lesser being. I’m trying to shift perspectives around taboo and stigmas surrounding mental health.

“I’ve had many stories that come back to me about people who have had their own mental health challenges and my pieces have inspired them to get out of the house. Those stories keep me going,” Tim said.

Art has been more than a hobby for Tim. It’s changed his life.

Since 2015, Tim has not required hospitalisation. The same year he set up his Twisted Murf website and social media pages.

“My art is a very good tool. When I’m down and miserable about myself, I can pull up my Facebook or Instagram page and see a photo of someone who’s found one of my pieces,” Tim explained.

“You can see it’s absolutely made their day. You can see when someone’s got a big, genuine smile, and to think that I helped to put that there and they will spread the word, makes me so happy.

“It’s the old trickle down theory, hopefully some of that joy trickles back to me,” Tim said.

Tim is exhibiting three of his pieces in EPIC’s upcoming fifth annual art exhibition, Shifting Perspectives: his signature piece, the dragonfly, and two unique pieces he is proud of: a squirrel and heron.

Whilst the dragonfly is made from a single piece of wire around 4 metres long, the bigger pieces require multiple, Tim explained.

“The squirrel has a very intricate tail and there’s nearly half a kilometre of wire in it. The wire is only 1.2mm wide, so you have to twist a lot of material to make the body so solid.

“I just love the elegance of the heron. I think it’s a beautiful little piece. It stands out as one of my favourites,” Tim said.

Tim’s animal sculptures have connected the community and inspired others to share their stories.

Recently a dragonfly was found in Elanora on the Gold Coast by a girl with autism and high anxiety. Her father shared their excitement on Twisted Murf’s Facebook page saying the dragonfly was even more special when he read the tag to his daughter and it said it was to raise awareness for mental health.

“Art has an amazing ability to induce feeling in people. It can challenge and confront. Mine’s a bit cutesy but that’s alright,” Tim laughs.

“Art really can change the way people look at the world.”

Shifting Perspectives is open to the public from Wednesday 30 October- Sunday 10 November at Graydon Gallery in New Farm, Brisbane. Visit the gallery in person to view artworks from more than 60 talented artists with disability.

To learn more about Tim’s pieces, and perhaps find one for yourself, visit Twisted Murf’s Facebook page.