You are here: Home / Mental health and wellbeing / Misconceptions about bipolar disorder 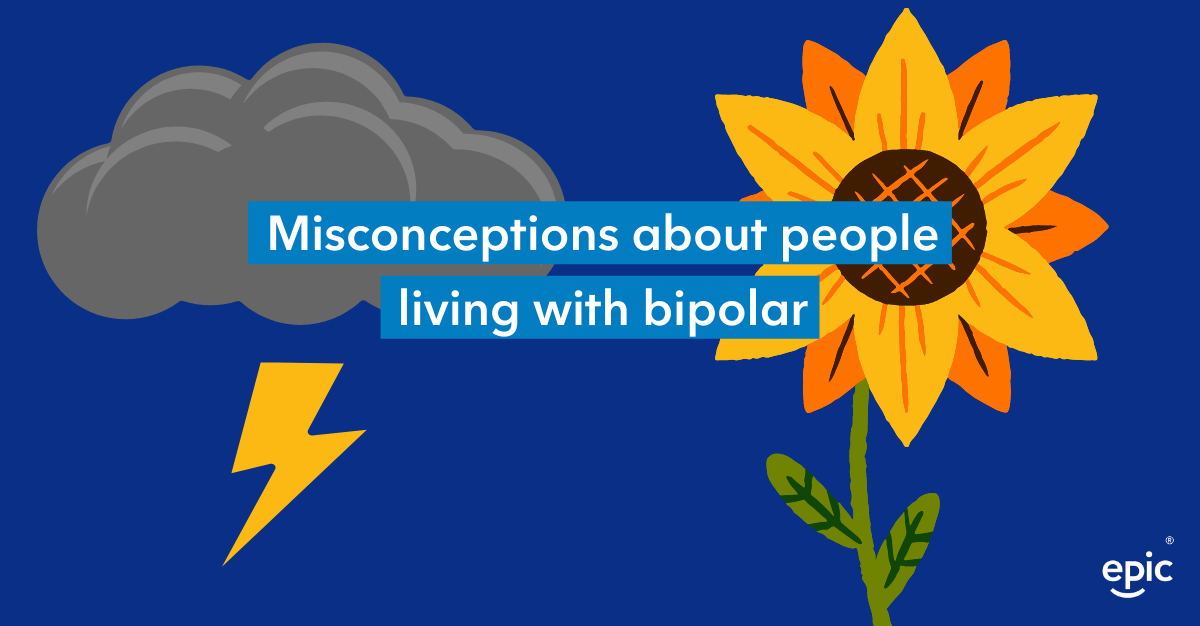 Complex mental health conditions, such as bipolar are incredibly misunderstood. Whether it is due to a general lack of understanding or believing in damaging stereotypes many people with bipolar have faced with discrimination, bullying, isolation or, at its worst, violence throughout their life.

The 30th of March is World Bipolar Day. World Bipolar Day is dedicated to educating the community about bipolar disorder, helping people with bipolar access help, and creating steps to eliminate social stigma.

Over the last 30+ years, we’ve supported countless people with bipolar to access support, break through society’s barriers, and reach their potential. We believe no one’s mental health condition should dictate what they can and can’t achieve in their career, life, and family.

For World Bipolar Day, we’re breaking down just a few of these misconceptions in the hope that people will educate themselves further and better understand what it is like to live with bipolar.

What is bipolar disorder?

Bipolar disorder is where people have intense mood changes. People with bipolar experience extreme highs and extreme lows as well of periods of levelled moods in between.

There are different types of bipolar which all involve episodes of chronic depression and varying levels of mania.

When someone is experiencing a manic or hypomanic episode their thoughts and behaviour can be beyond their control. Some symptoms include rapid thoughts and speech, an inflated sense of confidence, euphoria, irritability, hallucinations, and delusions.

Many people view mania as “fun” or “productive” but in reality, being manic can be very damaging, scary, and cause long-term consequences.

On the opposite side, when experiencing a depressive episode people with bipolar can feel an overwhelming sense of sadness, lose all motivation, isolate themselves, and experience suicidal ideation.

1. Bipolar is not an adjective

Bipolar is often used as an adjective. Everyone has heard or said the phrases:

“Wow today’s weather was so bipolar.”

“I’ve had such a bipolar day”

“She is so moody, so bipolar at the moment.”

Although these phrases may seem harmless, using the condition as an adjective is both annoying and isolating for people living with bipolar.

Bipolar is not an adjective to describe something unpredictable, inconsistent, or erratic. It is a genetic and environmental mental health condition that changes the structure of the brain. Reducing it to an adjective encourages damaging myths and misconceptions.

People with bipolar already face harmful stereotypes, but to have these statements so casually thrown around only emphasises how little people know about their condition.

People living with bipolar disorder can manage their bipolar with a range of treatment options and live regular and stable lives.

The biggest issue for people seeking treatment is not being able to access it.

In Australia, wait lists for psychiatrists and psychologists are incredibly long with people waiting months to see a therapist. Waiting for a therapist who bulk bills is even longer.

When someone with bipolar is having an episode that requires immediate medical attention, the hospital is the best place to go. However, currently public hospital psychiatric wards are overfilled. Many are forced to turn away patients in need.

The expectation that people must seek treatment is only valid if everyone has access to the treatment.

3. Bipolar is more than the media’s “mad genius” trope

The media’s portrayal of bipolar pushes the idea of the condition to two extremes. It is either a condition that results in someone being violent or destructive or a mad genius who creates their best creative work whilst in a manic state.

People with bipolar experience long periods of levelled moods. Although romanticising or villainising bipolar may seem more entertaining, dismissing the nuances of the condition takes away from creating a well-rounded and interesting character.

Not only does this issue arise in film and television, but in the way we celebrate and criticise celebrities. People with influence can make a big difference in changing the narrative of mental illness. In recent years, celebrities have become more open about their individual struggles with mental health. However, there is a trend of people being commended by the public when they speak about overcoming a dark period of mental health in the past. At the same time, celebrities who are experiencing public episodes are scrutinised and laughed at.

This negative reaction to public figures experiencing complex mental health only extends the isolation and embarrassment that ‘regular’ people with bipolar can feel. Although it is not the responsibility of Hollywood to educate the public about complex mental health, there should be a conscious effort to unpack why people struggling with bipolar is considered entertaining.

4. Bipolar does not mean you are too unstable to work

There is a big misconception that people with bipolar or other complex mental health conditions cannot perform in employment.

Take Richard as an example. Richard has been working at Your Mates Brewery in a packaging role and has seen the significant difference stable work can have.

“My home relationship has changed enormously. The stability of an ongoing income is very important. My mental wellness is positively affected by the consistency of work,” Richard said.

Richard initially had a fear of the stigma or negative reaction he would receive from employers about his condition. This is why he connected with Disability Employment Services (DES) provider EPIC Assist (EPIC).

EPIC was able to help Richard secure employment whilst educating the employer about his barriers and breaking down any damaging stereotypes they had.

Richard’s employer couldn’t be happier to have him on their team. Any preconceived ideas about bipolar were immediately undone as soon as Richard started.

“People think that if they’re hiring a person with disability that it’s going to cost them more, or it’s going to take more energy or training to ensure that they’re able to do their job, but we’ve found the opposite with Richard,” said Christen McGarry, Head of Production at Your Mates.

If you have bipolar and are looking for extra support finding work with a supportive employer, contact EPIC Assist today. EPIC has service centres in Queensland, Northern New South Wales, and Tasmania, and are committed to helping you find a job you love.