You are here: Home / Job seeker testimonials / “I was literally in the gutter, and Rhys sat in the gutter with me … and I told him my story.” – Gavan 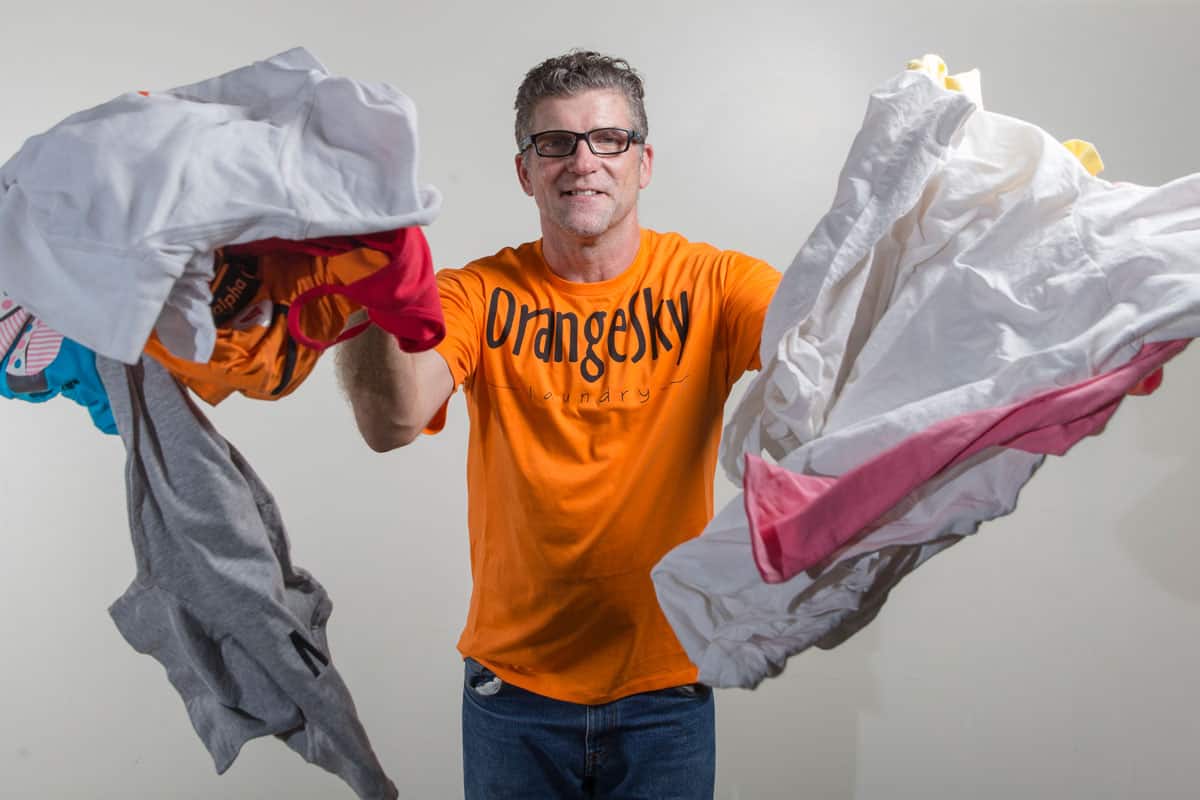 Fourteen months ago, Gavan was living in his car in Albert Park, Melbourne, with no conversation except the daily 3 AM check-up by the local police.

He made his way up to Brisbane, where he continued to live out of his car when, six months ago, he met Rhys May, Technical Development Officer and Laundry Van volunteer at Orange Sky Laundry.

Gavan is now an integral part of the Orange Sky Laundry team and says he’s proud to work with the people who sat down in the gutter with him and gave him a chance to change his life.

“I was at rock bottom. I was literally in the gutter, and Rhys sat in the gutter with me … and I told him my story,” Gavan said.

Gavan has over 20 years’ experience as a motion graphic designer and disc jockey. When he came across Orange Sky Laundry, he was down on his luck – no job and no home.

During his chat with Rhys, the two men realised that they had a lot of skills in common, so Rhys asked Gavan for his resume.

Two days later Gavan was invited to the head office in Brisbane to meet the CEO, Jo Westh.

“It was opportune that one of the volunteers on shift happened to be an IT guru. Rhys and Gavan started talking about their respective skill sets, we organised for Gavan to come in and have a chat with us about the sort of things that he was good at and passionate about, and we’ve gone on from there,” Ms Westh said.

Gavan began working in a volunteer capacity but is now working in a casual role as a graphic designer for Orange Sky Laundry.

His first task was to put together the Annual Report ready for the next board meeting. There was plenty of work to do, but Orange Sky Laundry wouldn’t let Gavan work his fingers to the bone.

“Jo would walk up to me and say, ‘Gavan, it’s seven o’ clock at night, you’ve given it a good day. You’re tired. Go home.’ They really did care, and made sure I did go home, even though she knew the mission-critical and time critical nature of the task,” Gavan said.

Not only did Gavan complete his task on time, his work continues to impress everyone who sees it.

“Gavan is very modest. I’ve seen his work on the Annual Report, and it is amazing,” Said Joel Power, EPIC Business Development Manager.

“Gavan really captured the essence of Orange Sky, with our bubbles, and buttons, our stitching. There’s real power in this document. We’ve had people say, ‘We’ve never seen an annual report like it.’ He’s done a marvellous job,” Ms Westh said.

For Gavan, working at Orange Sky Laundry provided him with the hope that things were going to change for the better. He was able to get back into the routine of getting up and going to work, which soon led to paid employment by October 2016 and a roof over his head in time for Christmas.

“I’ve been reteaching myself the regularity of going to work and having that routine, forcing myself to get out of bed. I was getting over that victim mentality, and there have been some really positive things that have come about because of it,” Gavan said.

Gavan’s experience of homelessness has taught him about the conflicting despair and resilience that comes with living on the street.

“Often there’s a despair that comes with homelessness, but there’s also a resilience that comes with homelessness. You can either go, ‘OK, I’m down and out. I can continue to be kicked in the guts and let the whole world walk over me’, or I can have the resilience to go, ‘Well, it can only get better from here’. You’re not dead. Onwards and upwards.”