Dr Dinesh Palipana shows strength in the face of adversity 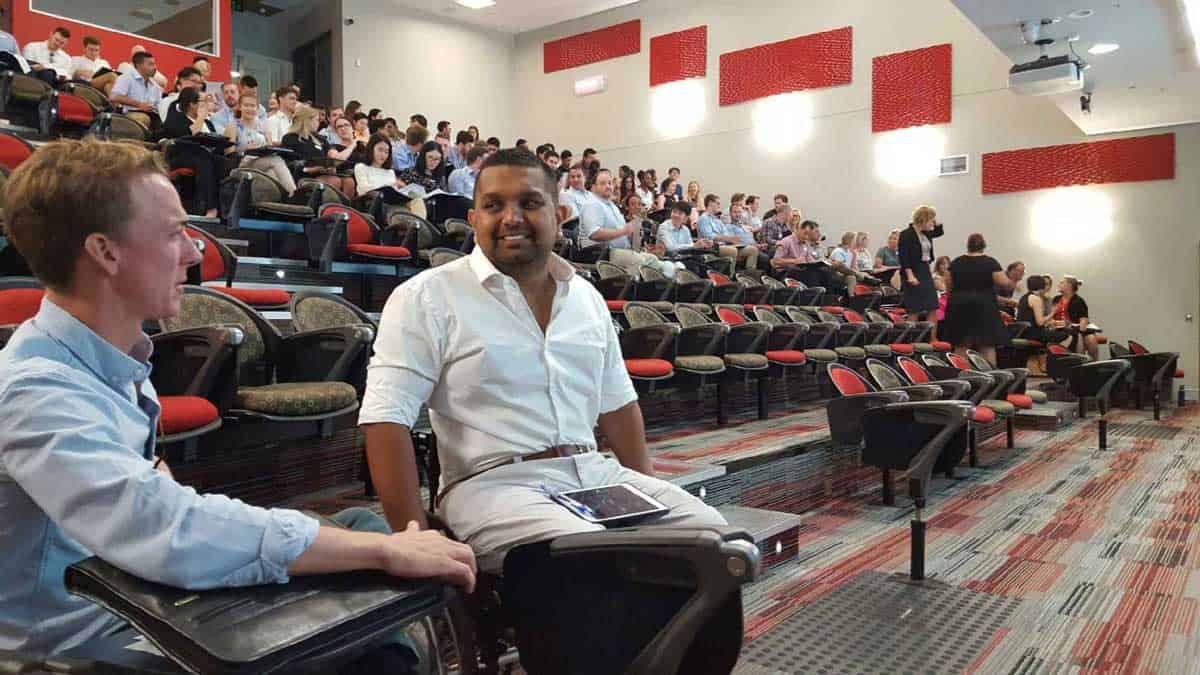 His name has been up in lights since a wave of media interest in the future of his burgeoning medical career, but Dr Dinesh Palipana remains as humble, appreciative and positive as ever.

“I’ve been blown away by the support, and I really want to say thank you to everyone who’s helped me,” said Dr Palipana, who highlighted EPIC Assist as a strong advocate and support during his time waiting for a job offer.

Dr Palipana, who became a quadriplegic after a catastrophic car accident in 2010, graduated from Griffith School of Medicine last year, but his job offer was delayed over six months.

“EPIC’s support has been fantastic. I was put in touch with them through a mutual contact and I can definitely say EPIC has been epic!”

Now in the first week of his new job at Gold Coast University Hospital, Dr Palipana couldn’t be happier to finally have the ball rolling.

“It feels incredible to have started now; I’m so happy to get going,” said Dr Palipana.

“I’ve been through many other challenges in my life, so this [waiting for the offer] wasn’t too bad. It was just annoying more than anything.”

The road to this sweet moment has been long and winding for Dr Palipana, who was mid-way through his medical degree in 2010 when his life took an unexpected turn.

“After the accident, I spent seven months in hospital, and it took about 4 ½ years to put my life back together,” said Dr Palipana, who spent his recovery in Sri Lanka surrounded by family and friends.

Despite the many challenges over the years, Dr Palipana’s passion for medicine never wavered. And when the time was right, he returned to his studies.

“I had great mentors in the Griffith School of Medicine who I was in communication with, and we eventually decided to give it a shot,” said Dr Palipana.

“It’s been new ground for everyone. There’s only been one other case of this happening [a person with quadriplegia graduating as a doctor] in Australia, so it was a learning curve.”

Despite having just graduated, Dr Palipana’s has accomplished a great deal to date, heavily involved in cutting-edge research in the areas of spinal injuries and the correlation between cancer in women with postmenopausal bleeding. He also spent time at Harvard Medical School as a visiting student.

“I was heartened to see Dinesh join the 90 other interns who commenced their clinical training at our world-class facilities,” said Mr Langdon.

“We are committed to facilitating Dinesh’s dreams and we will support this promising young doctor’s medical career journey in balance with our patient-centred care approach.”

To others that have faced an unexpected setback in life, Dr Palipana repeats the valued advice given to him by a good friend.

“My friend always told me life is a series of highs and lows. When you’re up on a high you just have to stay up there and enjoy it, but when you’re low you need to know that it will always get better. That’s always stuck with me,” said Dr Palipana.