You are here: Home / Job seeker testimonials / “I love my job because it helps me to become independent.” – Alex

“I love my job because it helps me to become independent.” – Alex 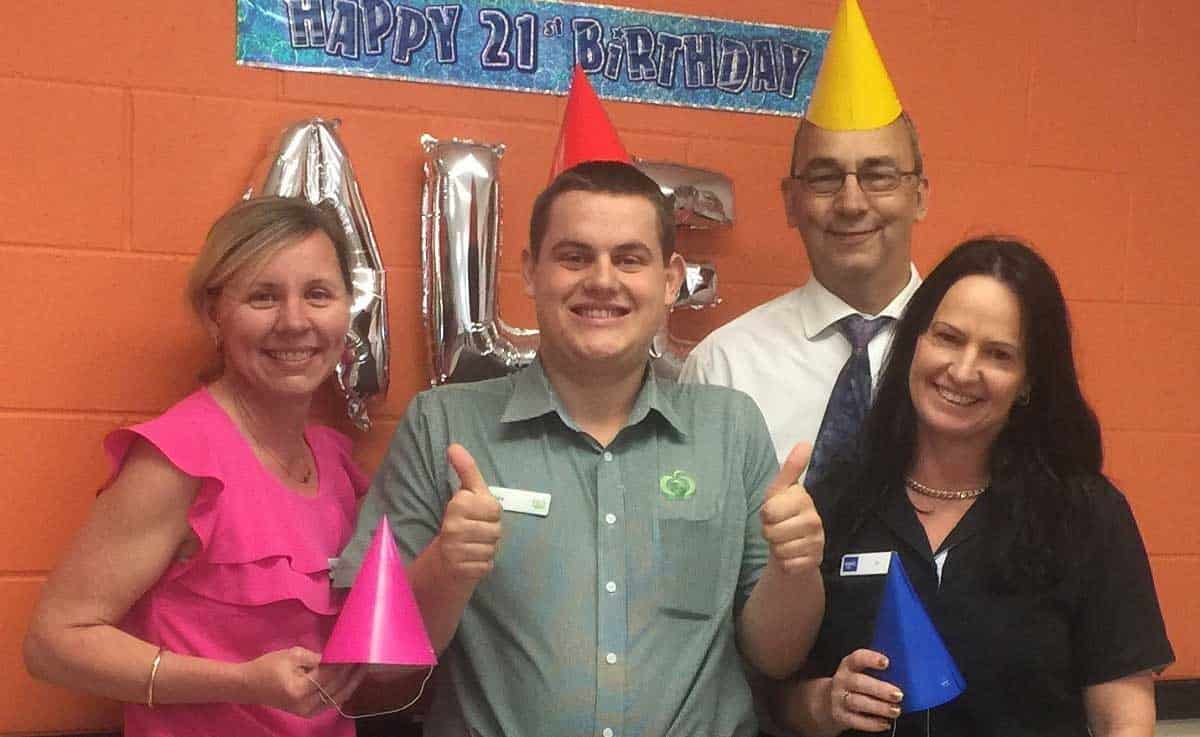 A surprise 21st birthday bash at work is exactly what Alex needed to cap off what has been a very successful year. Alex blew out his candles alongside EPIC staff and his Woolworths colleagues, who joined him for a celebration featuring cake, balloons, streamers and laughter.

Alex started off collecting trolleys for Singh Enterprises over 12 months ago at Woolworths in Caloundra, but always had his sights set on working inside the store. 6 months ago, a role at Woolworths Rothwell became available and he has been happily employed ever since.

“My favourite thing about work is helping customers. I have also made lots of new friends at work, and become part of the team,” said Alex.

“I love my job because it helps me to become independent. Thank you, EPIC and Woolworths.”

Alex began his role with full support, which included being picked up from home, on-the-job support while at work and getting dropped back home after his shift. Over time, his skills and confidence have improved significantly.

We provided Alex with travel training, and he has since been able to travel to work unaided and begin his shift alone. Now it’s time for Alex to progress into completing his entire shift without our assistance.

“A couple of days ago, I met with Alex at work to discuss reducing his on-the-job support needs,” explains EPIC employment consultant Joellen Clifton.

“It’s been wonderful to see Alex’s progress; he’s doing really well in his job, and has a cheerful, positive disposition. We know Alex’s goal is to work independently in his role, and we are confident he will reach that goal.”

Alex has found a supportive employer in Woolworths Rothwell, and Joellen said the staff have been singing Alex’s praises.

“I spoke to Shane Stanley [Woolworths Rothwell Store Manager] recently and conveyed just how much Alex is enjoying work, and how the team has contributed to him settling in and finding his feet so quickly,” said Joellen.

“Shane responded with how amazing Alex is, and how he brings a smile to the faces of many staff members. She said she can tell how proud he is to work in the store, what a great job he does and expressed that he is a valued member of the team.”

Joellen said seeing Alex’s passion and enthusiasm for his job, and the positive impact it makes on the team is a very gratifying part of her job.

“Shane mentioned that sometimes staff come to work feeling down and Alex’s positive attitude turns their day around quickly. They all feel much better, as his smile and positive attitude is very contagious,” said Joellen.

“Seeing these mutually beneficial relationships evolve is so rewarding; it’s a win-win for both Alex and Woolworths. That’s what it’s all about.”